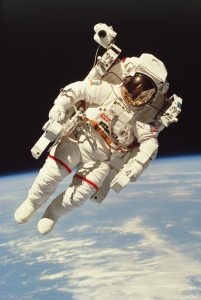 In 1969, Buzz Aldrin was the second human being to step foot on the Moon’s surface as part of the Apollo 11 mission, cementing his spot as one of the most important people of the 21st century. Today, at age 88, he is embroiled in a legal battle with his own children who claim he is suffering from dementia. Buzz claims they have mismanaged his finances. Sadly, it is an excellent example of why proper estate planning, including incapacity planning, is so crucial.

According to a recent news story, Apollo 11 moonwalker Buzz Aldrin is suing two of his children and a former business manager, accusing them of misusing his credit cards, transferring money from an account and slandering him by saying he has dementia. In the nearly 50 years since he walked on the moon, Aldrin has built an empire. And it’s this empire that the former astronaut says has been mishandled.

Aldrin filed a lawsuit earlier this month in Florida state court against his two youngest children, Andy and Jan Aldrin, and his longtime manager, Christina Korp. Andy and Jan are board members of Buzz Aldrin’s ShareSpace Foundation, a nonprofit that promotes stem education for children. Korp is Buzz Aldrin’s “mission-control director” and the vice president of marketing and business development at Buzz Aldrin Enterprises, a private company. The lawsuit asked a judge to remove his son Andrew from control of his financial affairs, social media accounts and several nonprofit and business enterprises. Andrew Aldrin had also been a trustee of his father’s trust.  Aldrin claims that two of his children and his former manager have taken advantage of their roles in managing his assets, and are exploiting the elderly. He says the Buzz Aldrin Space Foundation is using its finances against his wishes by funding “future educational endeavors” instead of current ones. The lawsuit is rife with allegations of fraud, conspiracy, exploitation of the elderly, and other finance-related charges. In it, Buzz alleges that Andy and Korp have taken control of his “personal credit cards, bank accounts, trust money, space memorabilia, space artifacts, social-media accounts, and all elements of the Buzz Aldrin brand.”

The suit claims that Andy transferred $475,000 from his father’s bank account into his own bank account over the last two years, and that the two children have spent up to $60,000 using credit cards that are authorized under Buzz’s personal account, all without Buzz’s knowledge or consent. The former astronaut further claims that Andy, Jan, and Korp have “forbidden” him from marrying and “specifically and deliberately have undermined, bullied, and defamed all of [his] personal romantic relationships.” He alleges that Andy and Korp have slandered him by telling others that he has dementia and Alzheimer’s disease.

Aldrin accused his daughter Janice in the lawsuit of not acting in his financial interests and conspiracy, and he accused his former manager, Christina Korp, of fraud, exploitation of the elderly and unjust enrichment. Also named in the lawsuit are several businesses and foundations run by the family.

Not surprisingly, the Aldrin children have denied the allegations. “The time has come to recognize where the elder exploitation is truly occurring and address the flawed foundation of the lawsuit,” they said in a statement Tuesday. “Let it be clear that every one of these allegations are products of the increased confusion and memory loss that Dad has demonstrated in recent years.”

Korp also denies the claims, and believes that the lawsuit is the result of Buzz being manipulated by a new set of managers. “Almost a year ago, some people began to exert undue influence on Buzz,” Korp said in a statement. “These individuals began to actively try to drive a wedge between Buzz and his children, and me, for what I fear is their own benefit.”

Does Buzz Need a Guardian?

Andrew and Janice Aldrin are trying to become his guardians, claiming he suffers from memory loss and confusion. They filed a petition in Florida state court in May, claiming their father was incapacitated. They claimed he was associating with new friends who were trying to alienate him from his family and that he had been spending his assets at “an alarming rate.”

With regard to the lawsuit filed by Aldrin, his children said in a statement that “these allegations are products of the increased confusion and memory loss that Dad has demonstrated in recent years,” and that they can be refuted by witnesses and bank or corporate records if necessary. “We are committed to protecting him, his reputation and his legacy,” they said. “Our work together on this foundation is testament to that.”

As is common procedure in a guardianship case, court-appointed mental-health experts are set to evaluate Aldrin’s competency.  In April, however, Aldrin underwent his own evaluation conducted by a UCLA psychiatrist, who concluded he was capable of managing his own finances and health.

In a statement, Andrew and Janice Aldrin said they’re saddened by the “unjustifiable” lawsuit.  “If nothing else, our family is resilient and our ability to work together to solve problems and accomplish great things is strong,” the Aldrin children said. “We love and respect our father very much and remain hopeful that we can rise above this situation and recover the strong relationship that built this foundation in the first place.”

Please join us for an upcoming FREE seminar. If you have questions or concerns about estate planning, contact the experienced estate planning attorneys at Kulas Law Group by calling (772) 398-0720 to schedule an appointment.